My First Time (A Guest Blog - opinions are authors own).

Picture the scene: a young, innocent *cough*, naïve *COUGH* 18 year old is off for her first LARPing adventure with her boyfriend and several other friends. She has never LARPed before, but has been battle re-enacting for over a year so is skilled in sword and spear – the proper ones, with metal that can hurt, not latex/rubber which surely cannot even bruise (how soon she would learn…), so it shouldn’t be that hard to learn.

Plus she reads a lot of fantasy/sci-fi novels and has played the odd D&D, although not much and not for some time. Should be fine, surely?

Well, no. Not when the Lord of Chaos decides he has taken quite a liking to you and you are strongly suggested by him to be gifted to him by your boyfriend/person for whom you had been happily playing concubine and following his lead.

Dammit! What’s the etiquette for this? What do you do? WHAT THE HELL IS GOING ON?

The problem was, the situation had not been explained to me. I had no idea what to expect and for someone with slight social anxieties, made much worse by not knowing anyone in the group to which I was traded, I was quickly floundering out of my depth. Lest this should worry any newbies, panic not. LARPers are almost all absolutely lovely people who will come out of character to explain what is occurring if you ask them quietly. Tip though, don’t shout it across any scene which is playing out, or battle which is happening. That shall not go well for you, or those around you, and may result in some unnecessary deathing. Yes, it’s a verb! Well, it is now…

The combat was fine; I had the fight training (even in pratfalls). The costume was fine, who hasn’t seen a fantasy movie and really wanted to dress in easy-to-fight-in yet sexy clothes. In my case just forget the sexy, fighting clothes will do me! Camping, great. The best part of re-enacting and LARPing is sitting around a camp fire quaffing mead/real ale and eating hunks of freshly spit-roasted meat (okay, whatever we could pick up from the Supermarket on the drive to the site), chatting about the day’s events. That would be a good time to ask any questions you may have.

It’s the actual LARPing that is the crux of the anxiety for all of us newbies. I did not know what I was getting into, and that reduced the potential fullness of the joy of the experience for me.

Back to my being traded. My main worry was that my lack of experience would ruin things for the other people around me who in my head were all clearly vastly experienced and had myriad stories and characters running around their heads at all times. I was also a little unsure of what exactly WAS expected of me, given the subject of the trade was me.

This was a silly thing for me to worry about. LARPing is not necessarily scripted, and this one certainly wasn’t. We were all winging it. It was absolutely fine to say I didn’t know what was happening, and after I screwed up the courage to mention it to the Dark Chaos Lord to whom I’d been traded (and who was rather sexy, making it all the more embarrassing for me) he let me know what was happening and that no, I did not have to spend all my time with him as a result! There was no expectation on me to do anything I was not absolutely comfortable with, and moreover he was a little mortified to realise the extent of my worries. It would be easy for a newbie to be taken advantage of. If you do not feel comfortable, then do not stay in that situation. You will NOT ruin anything. LARPing is a game, and it is one which relies on and must have full consenting participation of all people present.

In short, if you feel uncomfortable or unhappy with anything, tell the person you came with and step out of the game for a while.

In the end, it was the action that mattered. It was noted in the game, and my role was set, but I personally did not have to do anything I wasn’t sure about, nor was anything expected of me. Once that freedom is set in your head, the freedom to experiment with the LARPing role becomes massive fun.

Ask the friends you went with what the etiquette will be for the meet you are going to. There may be a storyline or several planned, or ready set battles. Simply ask what will be expected of you. I guarantee what you may be worrying about will be nothing like what the reality is!

LARPing is the best fun you can have with your clothes on, FACT. However unprepared you may feel you are, it doesn’t matter. We are all outsiders in the LARPing scene. It’s where outsiders go to feel in, and you will feel in. You will. Promise!

Want proof? I went to the Discworld Convention in 2006 (met Sir TP - *proudboastface*) and as a member and enactor of the Lawyers Guild, managing to persuade the Assassins Guild led by Stephen Briggs to provide all lawyer members of the guild with a blanket insurance protection policy against Assassination on the provision that we would not sue any assassins. They failed to read the small-print; it was only lawyers themselves who would not sue. No problems at all in people hiring lawyers to sue assassins, that was still perfectly acceptable. Assassins, however, could not take on any contracts against any lawyers, no matter who was hiring.

That’s playing a fantasy character in a fantasy setting, and I am still proud of that one! 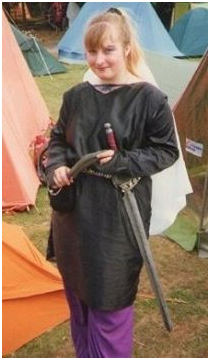 Welcome to Having a Larp

Hi Everybody!Our brand new website has a built in blog, so we thought we'd write one. After over 10 years of living in fields, whilst either having an outdated and unusable website or piggybacking on someone else's it, feels a little like Having a Larp is finally entering the 21st century. Just as soon as we [...]